It is with great pleasure to announce that the book is out in which Piet and I have a chapter:

Spaeth, Sebastian, and Piet Hausberg. “Can Open-Source Hardware Disrupt Manufacturing Industries? The Role of Platforms and Trust in the Rise of 3D Printing.” In The Decentralized and Networked Future of Value Creation: 3D Printing and Its Implications for Society, Industry, and Sustainable Development, edited by Jan Peter Ferdinand and Ulrich Petschow. Progress in IS. Berlin: Springer, 2016.

The preproof is on SSRN and you can get the PDF from there too. What is weird is that some freelance journalist seems to have discovered it and loosely retold it (without giving any credit). If he had at least changed the title and not copied it verbatim, I might not even have discovered his plagiarism. 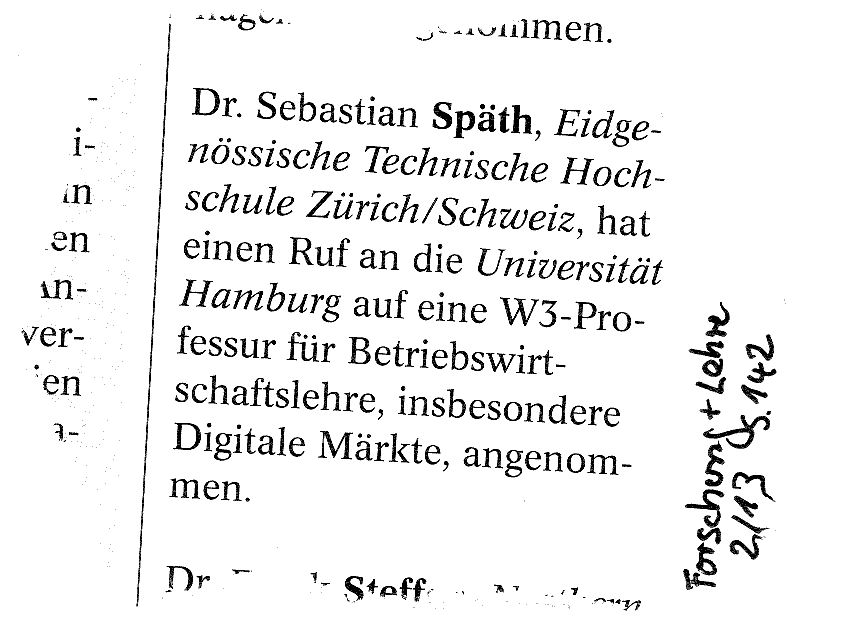 Today, I went to a seminar by, from, and for Economists!

This is relevant as we are also looking at contributions to a public good in Collaborative Open Innovation.

Describing standard Linear Public Good game. Decide how much to keep for you, how much to give to the group. The group income is then multiplied by some factor and split between the group.
.. Payoff x_i = e_i – c_i + m(Sum(c_k)1/N
Double blind, no one will know who has decided how. (not even lab personnel)

Highly endowed (rich) students get 10€, the poor one 5€. Project suceeds only if contributions reach 120NOK (half of all endowments).

The decision variable of how much to contribute is changed in three treatment groups. It is 1) Absolute, that is, “I decide to give 10NOK to the group”, it is 2) Relative, “I give 30% of my endowment to the group”, or 3) Payoff (“I keep 70 NOK for myself”).

Rich people gave the same in all cases (1,2,3). Poor people contributed most in the “Absolute” case (40NOK), less “Relative” (30NOK) and least in the payoff case (10NOK or so). Overall, it was a nicely and well done experiment and quite cool, overall. I could well imagine doing something similar.

For a number of reasons I had to reread this Gambardella & Hall, 2006 article [1] today. It is about researchers (in which open source software developers are included) having to chose between operating in a “Public Domain” (PD) manner, in which knowledge is disclosed according to “The republic of Science” and a “Proprietary Research” (PR) mode in which researchers attempt to monetize their work and keep the created “intellectual property” proprietary.

Overall, I have to say I found the paper to be somewhat sloppily researched and written. It refers to “forking” as selling a commercial program while an open source version of the same program co-exists, a definition which most of my acquintances would not approve of. Also, I am not at all sure that one can subsume all “scientists, open source contributors, user inventors and communities of technologists” into one category, as there are major differences in terms of incentives, governance structures and legal frameworks between those.

I do not think the GPL license is presented in a correct manner either (which I find disappointing for a paper that is mostly about the GPL license). It is not intended to restrict freedoms from a Public Domain point of view (the GPL is far from a Public Domain approach), it grants additional rights over the conventional copyright-based protection mechanisms (PR). While the end result might be similar, the emphasis is different, the GPL does not limit freedoms, it grants additional ones. This becomes important in cases when the GPL would be deemed illegal or invalid: The assets in question would not fall into the PD area, but squarely back into old-style copyright law, and its use by others would become automatically illegal too. Gambardella & Hall make a point on the enforcability of the GPL, and they seem to posit that there is “a lack of legal enforcement” and that the GPL mostly “acts as a signal” clearing potential ambiguities. I think, the companies that have been subject to a GPL violation law suit or informal settlement would disagree on the lack of legal enforcement. I that I think a thorough paper on the GPL as a legal coordination tool would be good to point out these issues in more detail. There are more things like that, but that is not the point.

The paper attempts to bring home 3 main points, 2 of them I can whole heartily agree with:

“Our contribution is simply to highlight that Olsons’s insight [that collective action needs coordination in order to be sustained] can be applied to the analysis of the instability of open systems.”

That is a valid and well observed point. I think that there is still too little research on Open Source from a collective action perspective. Our study [2] attempts to go there, but more on that would be welcome.

The implication is that there is little need for policy if more proprietary research is desirable, as the latter is likely to arise naturally from the individual actions. By contrast, policy or institutional devieces that could sustain the right amount of corrdination is crucial if the system under-invests in knowledge that is placed in the public domain.” p.880

Research on the fragility of knowledge sharing ([3] forthcoming in Research Policy, online available if you have a subscription) is certainly needed and its policy implications discussed. I do not think that the above statement will be valid under all circumstances (Open Source contributions seem to be coming without policies in place), but I am sure they are needed in other circumstances.

And third, their main point is to create a framework which rests under the assumption that (in my own phrasing):

It is interesting and intuitive assumption, but I am not convinced that it will universally hold true. I have previously written a piece about What constitutes free that asserts that there are 2 camps of “free” definers. One sees the GPL-free as they only free (as GPL’d assets are guaranteed to remain free), the other camp (BSD-free) sees the GPL as unfree as it limits what can be done with the code (eg it can not appropriated). Gambardella and Hall cater to the first group but silently ignore the second one. They are even closer to any “PD” scheme, but would never contribute to a PD-cum-GPL scheme which is not free enough. (If you don’t believe that read any BSD vs GPL flamewar in a mailing list). As such, attaching a GPL license to assets, could very well deter
PD-proponents from joining the GPL’d project. Which renders the paper’s underlying model moot.

Didier Sornette is incredibly busy marketing his own research efforts. That is incredible! Not only is his and Riley Crane’s YouTube Research on ETH Life, The New York Times, and der “Blick am Abend”, but our own Reuse research is being pushed e.g. as a physorg news entry.

I am currently attending the seminar on user innovation at the Technical University Munich. The atmosphere is very much informal and relaxed, I enjoy that. Eric von Hippel is undoubtably the star of this community: having pursued the topic since the mid 70s (as far as I know), he also deserves this. Looking forward to the rest of the seminar… (now back to listening to the presentations :-))

By the way, Stefan Haefligers presentation was gradually moved forward, so that he is now second after the opening speech (and Karim Lakhanis presentation).

Now that we started to research on Knowledge Reuse in Open Source Software Development, things are progressing faster again. Today we discussed whether the term reuse limits our focus too much. We played with a thesaurus and tried to come up with alternatives and discussed if they would be appropriate, what the [dis]advantages were, etc. We’ve come up so far with Knowledge…
… Reuse, … Diffusion, … Disemination, … Replication, … Recycling, … Recovery, … Adaption.
So far we are staying with Reuse but this brainstorming session has indeed helped us to identify fine grained differences about how knowledge can be reused.